As the country gathers together to celebrate a virtual Pride Day, the struggles of Black members of the LGBTQ+ community should be brought to light. Combatting cultural stigma to systemic racism, young people like Aja are repaving the way this community is seen and understood. The Quell Foundation is honored to share her story with our audience today. Please note, this story contains sensitive content.

I’ve always been the black sheep in my family. The overachiever, the smart one, the creative one, the queer one. I grew up in a strict, Afro-Caribbean household in South Central Los Angeles where emotions were seen as weakness, and being a criminal was better than being queer. I was an extremely sensitive child and was often chastised for it. In my culture, you are expected to be strong at all times otherwise, you are letting your ancestors down. Aside from the emotional abuse I endured, I was also sexually assaulted throughout my life until my late teens. I kept it to myself, hidden inside like a little box, because I felt that it would result in more emotional abuse.

My family expected me to be a rock, to be the “successful child.” I was highly intelligent and inquisitive, two traits that 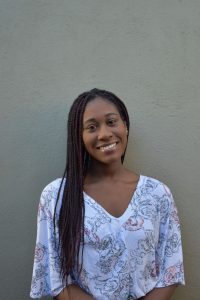 could potentially lead me to great success. However, this was immense pressure and that little box where I kept all my trauma expanded. I felt that I had to be perfect at everything and one mistake meant great disappointment from my family. On top of that, I was expected to be a role model for my younger brother who has autism. I felt that because I was “functional,” none of my problems added to my brother’s struggles. In black culture, mental illness is seen as something that only privileged people have. If a black person has any symptoms, they are expected to shrug them off and be resilient. My parents only believed my brother’s diagnosis because they could see the physical manifestations of it within him. With me, I constantly had to embody the stereotype of the strong black woman.

Once I got to high school, my disorders began to manifest. I was constantly stressed by the pressures at home and new pressures at school. My sophomore and junior years were the worst as I was dealing with intense courses and I was coming to terms with my sexual orientation. Being a black woman and being queer did not seem to mix. Every queer show or movie I watched only featured white gay people or the rare black male love story. I never saw queer black women on screen and the lack of representation made me question my sexuality even further. My friends and others constantly forced me to pick labels that I didn’t identify with. I felt like an outsider in the queer community because of my ethnicity and my femme presentation. I never seemed to be queer enough for the spaces I was in and eventually I shut down.

I wanted to numb my pain and I did. I began cutting and taking up to 20 painkillers a day. I began having panic attacks every day, falling asleep in my classes, and having extreme stomach aches. My grades went from A’s to C’s and I stopped caring about everything. I was eventually hospitalized after a severe nervous breakdown and had a terrible experience. The doctors thought I was faking my symptoms and called me dramatic. I had passed out and could not walk and one of the nurses told me to “get up and walk, black girl.” I felt belittled and insignificant and decided no one should have to feel this way in a space meant to heal them.

I never want anyone to go through the things I have been through. I have decided that I will no longer be phased by the strong black woman troupe that has been pushed on to me. I have also decided to no longer let my disorders or sexual orientation labels define me. I am currently breaking the generational trauma that my family has inherited by loving myself and simultaneously healing myself. I am also educating my family about the mental health stigmas that are present within our cultural communities. I plan to become a holistic counselor or psychologist so that I can help incorporate indigenous cultural practices and beliefs into western medicine. The experience I had made me realize that my culture as well as other POC’s cultures are not reflected within the healthcare system. I want to show other queer people of color that they can overcome the stereotypes that have been pushed on to them. Representation is important and I want to be a tool for others like me who are the black sheep of this world.

Are you interested in sharing your story with The Quell Foundation? Email liftthemask@thequellfoundation.org to learn more.